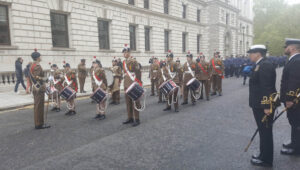 Above: The pageantry of the Royal Society of St. George’s annual St. George’s Day parade in Westminster, London.

The Order is proud to partner with other organizations who share our aims.

The UK Brigade of Kentucky Colonels

The award of a Kentucky Colonelcy, which is made to both gentlemen and ladies, is the highest that can be bestowed by the Commonwealth of Kentucky. It is given to people who have made a positive contribution to their community. The Kentucky Colonels is a philanthropic organization whose members also undertake to be goodwill ambassadors for the Commonwealth of Kentucky.

Many members of the Order of St. George, both in the UK and the United States, are Kentucky Colonels and so use the honorific ‘Colonel’ in their title. However, for the avoidance of misunderstanding, it should be pointed out this use of the title ‘Colonel’ should never be taken to imply that the holder has the military rank of Colonel in the US or other armed forces.

The Royal Society of St.George

The Order of St. George is affiliated to the Royal Society of St George, England’s premier patriotic organization, promoting and celebrating the English way of life. Queen Victoria was the Society’s first Royal Patron and the Society has since enjoyed the Patronage of every reigning monarch.

The Royal Society also actively campaigns for St. George’s flag to be flown prominently throughout England, and one of the Society’s long-running campaigns is to have 23 April – St. George’s Day – declared a public holiday in England.

The Order’s Invicta Encampment works alongside the very active North Downs Branch of the Royal Society of St. George. A particular theme is commemorating the Battle of Britain, which was largely fought in the skies over Kent. We have supported events at the Battle of Britain memorial at Capel Le Ferne and have been delighted to welcome the wonderful young people of the Air Cadets to ceremonies at the war memorial in East Malling.

The 3rd Bt Princess of Wales’s Royal Regiment is the Order of St.George’s affiliated regiment, and we support financially the work of the Regimental Welfare Fund.

Known as the Tigers, the Regiment recruits many of its officers and soldiers from Kent, Sussex, Surrey, London, Middlesex and Hampshire as well as the the Isle of Wight. It is also the only infantry regiment that recruits from the Channel Islands.

The Regiment has a long, distinguished history, having been involved in virtually every theatre of war since the Battle of Tangier in 1662.

It is the most decorated of all British Army regiments, with 57 Victoria Crosses including the VC awarded to Lance Corporal Johnson Beharry in 2004 for his gallantry in Iraq.

There are few institutions in the United Kingdom with an unbroken three centuries of service and none of them is so close to the heart of the nation as “The Men in Scarlet”, the Chelsea Pensioners, and their home, the Royal Hospital Chelsea.

Founded in 1682 by King Charles II and intended for the ‘succour and relief of veterans broken by age and war’, the Royal Hospital, with its Grade 1 listed buildings, still serves its original purpose.

The Order has been a long time supporter of the Royal Hospital Chelsea and was extremely proud to take the important further step of becoming a Platinum Friend of the Hospital. We also have an active Commandery based at the Hospital.

The Order of St. George as a cooperating partner with the Zentralrat Orientalischer Christen in Deutschland (the Central Council Of Oriental Christians in Germany). ZOCD is a non-profit association of Christians living in Germany who belong to the Oriental churches, including the members of the Coptic, Greek Orthodox, Chaldean, Syrian Orthodox, and Armenian Apostolic Churches, amongst others.

ZOCD works to foster cultural and religious tolerance, believing that it is only on the basis of peaceful dialogue that we can pave the way for a sustainable peaceful coexistence of all ethnic groups in the Middle East, Africa, and Asia.