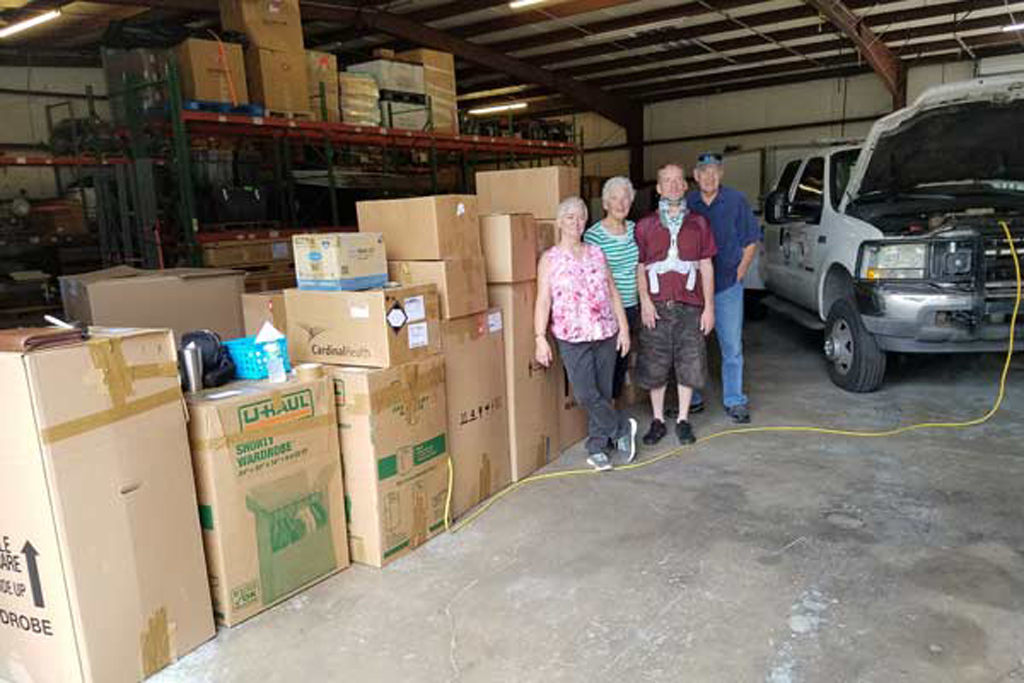 Hospitaller activities of the Order are expanding and varied. Some are moving apace while others seem to be moving at a less than aggressive pace due to a variety of factors, most of which are beyond our direct control.

Nigeria – Dame Chetachi Nwoga-Ecton’s When in Need Foundation have been, perhaps, our most impressive success to date. Thus far, two containers have been shipped to Lagos with their ultimate destination being Abuja, Nigeria, to core of WIN Foundation’s activities in support of medically underserved populations in Nigeria. Recently, Dame Linda Heller and Kay Saxon Brooks traveled to Nigeria to provide some hands-on assistance to WIN Foundation’s efforts. For her amazing ability to secure supplies from the likes of Vitamin Angels, Ameicares, Brothers’ Brother, Kingsway Charities, and Clean the World Foundation, Dame Heller was recognized at the Atlanta Investiture as the first US recipient of the OStG Order of Merit.

Our next donation effort for Nigeria will be securing obstetrical kits for use in clinics throughout the areas served by WIN Foundation.

Currently, plans are underway for KCStG Richard “Doc” Clinchy, to travel to Nigeria to provide training for Nigerian police and maritime enforcement officers. The training will contain elements Tactical Combat Casualty Care since the weapon of choice of nefarious persons in Africa is the AK-47. The Kalashnikov AK-47 was an invention of the former Soviet Union, utilizes a 7.62 mm round and with a detachable box magazine can discharge up to 30 rounds without reloading. The wounds of the AK-47, due to the ballistics of the 7.62 mm round can be devastating. The training will focus on stopping bleeding and other immediate interventions that may prove lifesaving.

Uganda – Working with Gibriel Miiro, the Order is enlisting assistance for a Hepatitis B Foundation in this African nation. KCStG Clinchy, recently connected Mr. Gibriel with a lady very who is a major player in the exporting of coffee beans from Uganda. At the time this article is being drafted, she is in Uganda and will be meeting with Mr. Gibriel to see if she can marshal resources to help with the foundation. Our resources will likely be directed to other projects, but the individual involved in the coffee industry has a long history of working with worthy causes within Uganda. We will be monitoring progress to determine whether we need to become directly involved insofar as supplies and equipment. If this source of support does not garner results, we will turn to the same sources and others that have helped us in our efforts in Nigeria.

Jolo, Philippines – If our readers have been following the news, Jolo is where ISIS recently bombed a Catholic Cathedral. As a result of some of our other activities, we recently became acquainted with the founder of Asia America Initiative, Albert Santoli. Asia America Initiative is focused on providing support and resources for the citizens of the southern Philippines. Most significantly, especially where Jolo is concerned, he support efforts to train young people as first responders and first aid providers. To that end, part of an incoming donation from a supplier to EMS and federal agencies, will be directed to his projects in the southern Philippines. We hope shortly to have received the anticipated donation, split out what will be most helpful for Asia America Initiative, and direct the remainder to the project in Liberia…see below.

Liberia – At our Investiture in Atlanta this past October, a guest of our Grand Commander was Rev. Sidney Morris, Greater Piney Grove Baptist Church. Rev. Morris is Director of their International Outreach Ministry. His church is supporting the creation of a clinic about 100 Km from Monrovia, Liberia’s capital city. Like the projects in Nigeria, this clinic will provide medical care to underserved citizens of Liberia. Of historical significance from a medical standpoint, Liberia was one of the nations hardest hit by Ebola virus outbreak in 2014. That same, very high mortality virus, is breaking out again in the Democratic Republic of the Congo and growing in severity. For starters, we will take whatever is left over from the donation mentioned above and make that the first load of supplies and equipment heading to Liberia. Right now, all we know is that there is 700# of medical supplies and equipment heading to the FloridaOne, Inc. warehouse in Ft. Walton Beach, Florida. Until we see the manifest from that donation, we’ll not know what will go to which recipient. In addition, another supplier has promised us four pallets of short-date and expired supplies.

Lebanon – Our Grand Commander has been working cooperatively with the Sovereign Military Order of the Temple of Jerusalem (SMOTJ) and elements from the US Department of Defense to move assets to the Christian communities in Lebanon. Their major needs is for ambulances but these are difficult to come by as a donation. We will continue to pursue some resources with whom we have contacts in that regard.

San Pedro Island, Belize – Working with our colleague Pader Nolan, we are assisting him in the development of an ambulance service in Belize. Pader has costs for equipment, supplies, and an ambulance and is in the process of raising funds from hoteliers on the island. He already has a medical clinic on the island who has agreed to work with him in supporting and training fire fighting personnel and others in providing patient care capabilities. OStG may send a small team to San Pedro Island later this year to train all volunteers as Emergency Medical Responders and, at the same time, conduct an Investiture to establish a Commandery on San Pedro Island to support the Order of St. George Ambulance.

Jamaica – Two years ago, it was brought to our attention that there was a desperate need for prosthetics and prosthetist consultations in Jamaica. As in Africa, the native Caribbean population suffers from endemic hypertension and endemic diabetes. A side effect of diabetes, poorly understood as some sort of sugar disease when, in reality, its real devastation comes from small vessel anomalies, the result often being lower extremities that become so damaged that amputation is required…thus the need for prostheses. We are still looking for help and a solution to the desperate need brought to our attention by KStG Robert Scott. Should any Knight or Dame know of any worthy health care project/need anywhere in the world or should you know of a source of medical supplies, equipment, or possible donated ambulances, please contact Dr. Richard A. Clinchy.