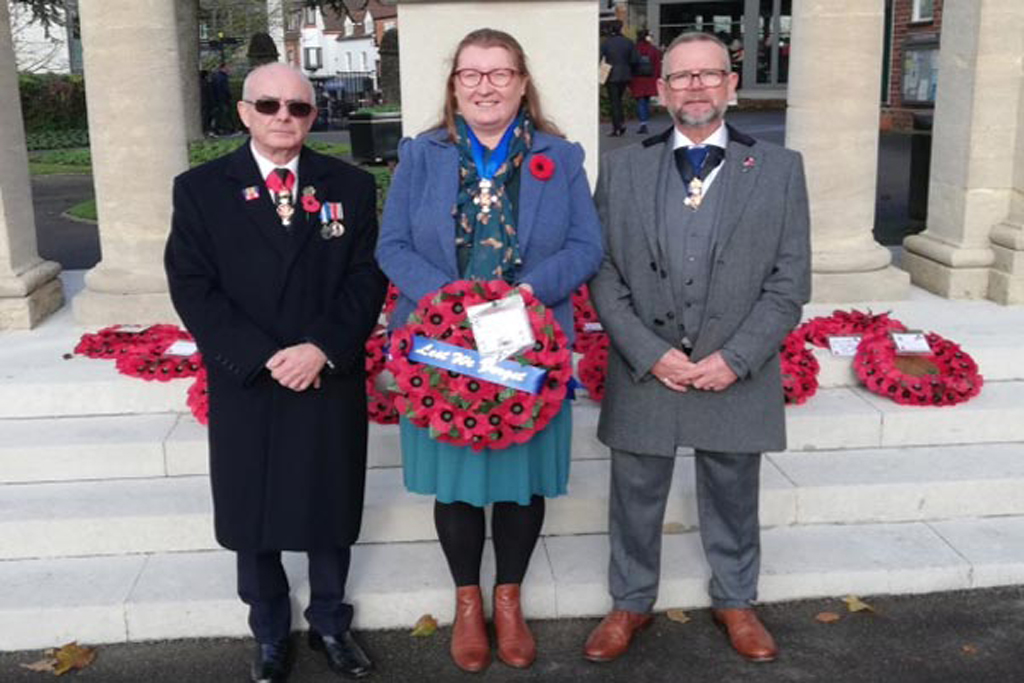 On Sunday 10 November 2019, Dame Mandy East, Officer Johnny East and our Director of Membership Chevalier Keith Homewood, represented the Order at Remembrance Sunday in Guildford, Surrey. The service was held at Holy Trinity Church in Guildford’s historic High Street, followed by wreath laying at the memorials in the Castle Grounds,

For the last five years, Colonel (Retd) Patrick Crowley DL of the PWRR has used part of the Remembrance Day service to remind the congregation about ‘Guildford’s’ regiment. The Queen’s West Surrey Regiment, which was based just outside Guildford at Stoughton barracks (the entrance arch, the Regimental Motif and quarters (now flats) are preserved and still visible today in Stoughton Road, Guildford) through to the work and service of the PWRR today.

During the Second World War the combined casualty figures for both Regiments was 3788 Officers, NCOs and men. Their names can be seen in the Book of Remembrance in the Regimental Chapels and on War Memorials throughout Surrey.

At Holy Trinity Church, an impressive Memorial and Book of Remembrance are dedicated to and record those who gave their lives. The Regiment’s Standards and Battle Honours proudly atop the memorial. Each year Colonel Crowley has placed a wreath of poppies on the memorial.

The Order is proud and humbled by its association with the Princess of Wales’s Royal Regiment and the history behind it from 1661. We continue to support the PWRR Welfare Fund and we look forward to developing and strengthening our association with the regiment further. We remember those who gave and give their lives in conflict for our freedom and also we give thanks for the strong links with the Princess of Wales’s Royal Regiment – ‘The Tigers’.